Top Ranked Movies of All Time (Voted by Seniors)

Seniors often enjoy watching movies as a way to relax and escape from their everyday lives. Movies can provide seniors with an opportunity to laugh, cry, feel inspired, or simply forget their troubles for a couple of hours. In addition, watching movies can be a social activity that seniors can enjoy with friends or family.

There are many benefits that seniors can expect from watching movies. For instance, movies can help improve mental sharpness and memory recall. In addition, films can boost mood and reduce stress levels. Additionally, some research suggests that watching certain types of movies may even help protect against cognitive decline.

With so many benefits on offer, it’s no wonder that seniors are increasingly turning to the silver screen for entertainment and enrichment. So pop some popcorn, kick back, and enjoy the show!

This selection of movies from the Golden Age of Hollywood and beyond is always sure to please any audience. 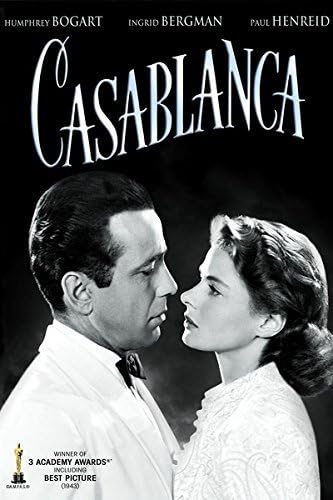 Casablanca is a timeless classic that has charmed audiences for generations. The story of Rick Blaine, an American expatriate who must choose between his love for Ilsa Lund and helping her husband escape from the Nazis, is as relevant today as it was during World War II. The film's themes of love, sacrifice, and betrayal are sure to resonate with seniors, who have lived long enough to know a thing or two about these things. Casablanca is also a visually stunning film, with beautiful cinematography that transports viewers to another time and place. It's no wonder this film continues to be one of the most popular movies of all time.

Gone With the Wind – A 1939 star-studded Civil War film with Clark Gable and Vivien Leigh.

Gone With the Wind is one of the most popular movies of all time. It is a classic love story set in the American South during the Civil War and Reconstruction. The film was directed by Victor Fleming and stars Clark Gable, Vivien Leigh, and Olivia de Havilland. Gone With the Wind was a huge box office success when it was released in 1939, and it won eight Academy Awards, including Best Picture. It is still considered one of the greatest films ever made.

The Wizard of Oz – Judy Garland’s timeless 1939 musical with some of the most-loved movie songs.

The Wizard of Oz is the perfect movie for seniors. It's nostalgic, heartwarming, and will leave you feeling like there's no place like home. The Wizard of Oz is one of the most beloved movies of all time. It's a timeless classic that has something for everyone. Whether you're a fan of musicals, adventure, or just a good ol' fashioned love story, The Wizard of Oz has it all. And what's not to love about those adorable Munchkins?

In the early 1970s, director Francis Ford Coppola released a movie that would come to define the Mafia genre. Starring Marlon Brando as don Vito Corleone, The Godfather tells the story of an aging crime boss and his family. The film was a huge success, winning multiple Academy Awards, and spawned two sequels. Today, The Godfather is widely considered one of the greatest films ever made.

For seniors who enjoy crime dramas, The Godfather is a must-watch. The film features strong performances from Brando and Al Pacino as Corleone's youngest son, Michael. The story is compelling, and the film's operatic style makes it an unforgettable experience.

To Kill a Mockingbird – A 1962 coming-of-age film with a career-defining performance by Gregory Peck.

To Kill a Mockingbird is a 1962 coming-of-age film with a career-defining performance by Gregory Peck. The film follows the life of Scout Finch, a young girl living in the small town of Maycomb, Alabama during the 1930s. The story is narrated by Scout's father, Atticus Finch, who is a lawyer. Atticus takes on the case of a black man accused of rape, and the trial becomes the center of the town's attention. Scout and her brother, Jem, learn about prejudice and injustice during this time, and their father teaches them to stand up for what is right. To Kill a Mockingbird is an important film that teaches valuable lessons about empathy and understanding.

Alfred Hitchcock's Vertigo is a psychological thriller that is perfect for seniors. The film tells the story of a man who becomes obsessed with a woman he is following. The film is full of suspense and will keep seniors on the edge of their seats.

Star Wars – The first of fantastical space trilogies offered by George Lucas in 1977 that broke many box-office records.

Many seniors enjoy watching movies that take them back to their youth. For some, this may be the original Star Wars trilogy. George Lucas released the first of these movies in 1977 and it quickly became a fan favorite. The movie broke many box office records and is still considered one of the best films ever made. If you have never seen the Star Wars movies, or if you haven't seen them in a while, they are definitely worth checking out.

Lawrence of Arabia – A breathtakingly gorgeous 1962 biopic with an Oscar-winning performance by Peter O’Toole.

Few people are as well-known as Lawrence of Arabia and his exploits in the Middle East during World War I. The 1962 film that bears his name is an epic biographical drama that chronicles his life, starring Peter O'Toole in the titular role. The film was nominated for ten Academy Awards and won seven, including Best Picture.

Lawrence of Arabia is a perfect film for seniors. It's a sweeping historical epic with plenty of action, romance, and intrigue. O'Toole gives a masterful performance as Lawrence, and the film's visuals are absolutely stunning. If you're looking for an enthralling movie to lose yourself in, Lawrence of Arabia is definitely worth watching.

It’s a Wonderful Life – Frank Capra becomes a household name with this story of an average Joe (James Stewart) whose life is saved by an angel.

Frank Capra's "It's a Wonderful Life" is the perfect movie for seniors. The story of an average Joe (James Stewart) who is faced with losing everything he has, but is ultimately saved by the love and support of his family and friends, is one that will resonate with seniors. The film's message of hope and redemption is one that will stay with viewers long after the credits roll.

One Flew Over the Cuckoo’s Nest – One of many fine performances by Jack Nicholson as a crazy-sane mental patient in 1975.

One of the most iconic performances by Jack Nicholson is in the 1975 film One Flew Over the Cuckoo's Nest. He portrays a man who is considered insane by society, but who may actually be one of the sanest people in the film. The other patients in the mental institution are all plagued by their own demons, and it is only through Nicholson's character that they are able to confront them. The film is a powerful commentary on society's treatment of those with mental illness, and it is a must-watch for seniors.

Ben-Hur – The 1959 Charlton Heston classic that tells the epic story of Judah Ben-Hur and the famed chariot race.

Ben-Hur is the perfect movie for seniors. It's an epic story of love, loss, and redemption that will keep them on the edge of their seats. The 1959 Charlton Heston classic is a timeless tale that is sure to resonate with seniors today.

The Bridge on the River Kwai – Based on a true event, this 1957 war drama follows a British commander leading a perilous effort in Burma.

The Bridge on the River Kwai is a 1957 war drama that follows British commander Colonel Nicholson. Based on a true story, the film depicts the construction of a bridge by Allied prisoners of war in World War II.

The prisoners, who are forced to work in inhumane conditions, begin to see the bridge as a symbol of their own endurance and resilience. As they toil away, they come to appreciate the camaraderie and sense of purpose that the work provides. In spite of their circumstances, they take pride in their accomplishment.

The film is an inspiring tale of hope and human perseverance. It is sure to resonate with seniors who have lived through difficult times and come out stronger for it.

Jaws is a 1975 American thriller film directed by Steven Spielberg and based on Peter Benchley's novel of the same name. In the film, a giant man-eating great white shark attacks beachgoers on Amity Island, a fictional New England summer resort town, prompting police chief Martin Brody (Roy Scheider) to hunt it with the help of oceanographer Matt Hooper (Richard Dreyfuss). The screenplay is credited to Benchley, who wrote it with Carl Gottlieb.

Some Like It Hot – The satirical 1959 classic about two jazz musicians on the lam with Marilyn Monroe, Tony Curtis and Jack Lemmon.

Some Like It Hot is a hilarious comedy about two jazz musicians who are on the run from the mob. They disguise themselves as women and join an all-female band. They both fall for the beautiful Marilyn Monroe. This movie is sure to make you laugh out loud.

High Noon is a 1952 Western that stars Gary Cooper and Grace Kelly. The movie was well-received by critics and is considered one of the best Westerns ever made. High Noon is a great choice for seniors who enjoy classic Hollywood movies. The film features Cooper as a small-town sheriff who must face a ruthless outlaw (played by Ian MacDonald) alone. With the help of his new bride (Kelly), Cooper's character stands up to the challenge and defeats the villain. High Noon is a thrilling, action-packed movie that also features a touching romance between its two leads.

Roman Holiday is a classic film that will appeal to seniors for its charming story and delightful performances. Audrey Hepburn plays a modern princess who, while on a state visit to Rome, escapes her royal duties and falls in love with an American newsman, played by Gregory Peck. The two have a wonderful time exploring the city together and their courtship is both old-fashioned and touching. The film was nominated for ten Academy Awards, including Best Picture, and won three.

The Adventures of Robin Hood – The 1938 swashbuckling epic with Errol Flynn in his classic role as the prince of thieves.

The 1938 swashbuckling epic "The Adventures of Robin Hood" is a great choice for seniors. Errol Flynn is in his classic role as the heroic outlaw, and the film features plenty of action, romance, and humor. It's also one of the most iconic films of its era, and its timeless story is sure to entertain viewers of all ages. Hobbies and Activities Seniors Can Enjoy During Lockdown Safety for Seniors: Essential Anti-Slip Products to Have Benefits of Travel For Seniors: Why The Elderly Should Still Travel The Top Outdoor Walkers for Seniors in the Market Today Elderly Nail Care and Seniors’ Health: What You Have to Know